Strategic use of the VetTrue™ System in the field 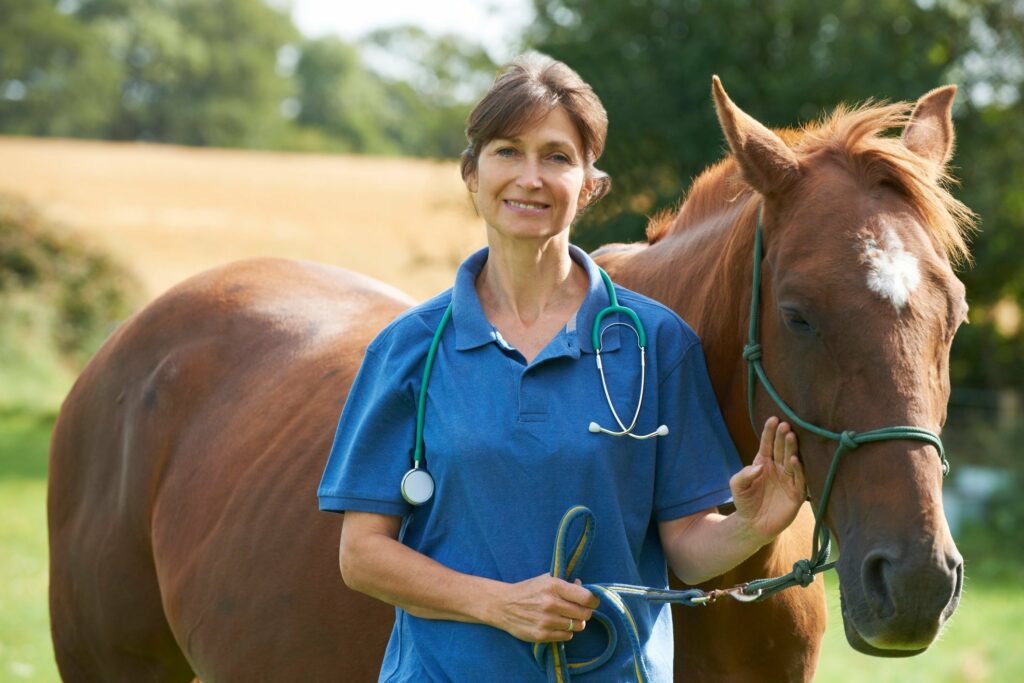 Equine veterinarians commonly treat sick patients ‘in the field’ rather than have them transported to veterinary hospitals for follow-up care and monitoring. If the location of the horse is remote, logistics may dictate it can only be seen once every day or two. Monitoring the patient’s vital signs is of critical importance in assessing the state of health and response to treatment.

The VetTrue™ System developed by Epona Biotec is state-of-the-art technology that allows veterinarians access to real-time core body temperature data from their patients in the field. By placing a disposable TailTab sensor beneath the tail, the horse’s body temperature is continually monitored and the data stored. When the veterinarian next visits the patient and opens the VetTrue™ App on their phone, the Tail Tab connects instantly via Bluetooth and downloads all temperature data since the last visit. The veterinarian can now see exactly how the horse is responding to treatment, and adjust antibiotic and anti-inflammatory medications precisely.

Photo Credit: Take the Moment Photography Epona Biotec is pleased to announce their sponsorship of Cambridge based Event Rider Jasmyne Speake. Jasmyne, who is currently in her first year of study for a Bachelor of Business degree at Waikato University, won the New Zealand National Junior Rider titles in 2018 and 2019.  Her most recent success was winning at the National Young Event Horse Championships having the highest placed 4YO & 5YO, and best placed Thoroughbred.  Currently ranked 131st by the FEI for the South East Asia & Oceania Zone, we look forward to following Jasmyne’s career and keeping her horses safe and well with the VetTrue™️ System, as they travel throughout New Zealand to compete. Photo Credit: Jasmyne Speake

Strategic use of the VetTrue System – Livery Yards

As a livery yard owner, you know the risk - any new horse has the potential to bring a highly contagious infectious disease into your yard, resulting in: your yard in lockdown, sick horses, vet bills, upset clients and a potential PR disaster. Although best practice is to quarantine new horses for at least 10 days, this is often not the most practical approach. So, what can you do? Well, taking your horse’s temperature twice a day is a good start. Chances are that your new horse may look completely fine but is actually brewing a virus and will develop a fever at some point in the next week. If you can identify this early on, you can take action right away and implement measures to stop the infection from spreading throughout your yard. However, recording rectal temperatures twice a day in a busy yard is time consuming and only tells part of the story, as diseases such as Equine Herpes Virus (EHV) cause ‘bi-phasic’ fevers, meaning that measurements taken only in the morning and evening may actually miss fevers occurring at other times of the day. The solution to these problems is now available. The VetTrue System™ from Epona Biotec is state-of-the-art technology that allows you to accurately monitor the temperature of your horses around the clock. The VetTrue System’s™ easy to use TailTab sensors can be attached to all new horses as they arrive and accurate temperature data will then be sent directly to your mobile device via Bluetooth, giving you and your clients confidence that the horse is in good health. Make the VetTrue System™ part of your yard’s standard operating procedure so you can rest assured knowing that our biosecurity technology has you and your horse covered 24/7. To learn more about the VetTrue System™ or to order TailTabs, visit our on page. #itsallaboutthehorse

Five years of intensive R&D by the Epona Biotec Team has paid dividends, and the new VetTrue System App is now available on the App Store. Designing a system for detecting fevers in horses created some initial issues when it came to field testing. During testing, it was simple enough to place a TailTab sensor on a horse in an equine hospital that already had a fever, but how could we showcase the sensors by demonstrating the development and detection of a fever in a normal horse?  This problem was solved with the simplest of ideas from equine veterinarian Dr Matthew O’Donnell, Director of the Cheshire Equine Clinic. It’s well known that following an Equine Influenza vaccination, some horses will develop a fever. Matthew’s idea was to simply place sensors on all the horses in a racing stable that were to be vaccinated, and then monitor what happened, comparing this to routine twice daily rectal temperature readings. The results were very interesting! As planned, a stable of horses had TailTab sensors attached one morning and then were vaccinated for equine influenza. After two days, the rectal temperature readings along with the TailTab sensor data was sent to Epidemiologist Dr Sarah Rosanowski for a statistical comparison. Using traditional rectal temperature readings, the stable staff identified one horse on the first afternoon with a fever, and an additional four horses the following morning. In total, the stable staff found 30% of the vaccinated horses had developed fevers.  When the temperature data from the TailTab sensors was assessed, it was found that 9 horses had developed fevers. The VetTrue System had identified that 56% of the vaccinated horses had developed fevers rather than only 30% as identified using rectal thermometers. The trial demonstrated that the VetTrue System was practical to use and worked seamlessly when simultaneously monitoring the temperatures of a large group of horses. It also demonstrated that real-time 24-hour temperature monitoring is a more sensitive way of detecting fevers in horses than the traditional twice-daily rectal temperature method. In addition, the study was also of interest, as the percentage of horses developing fevers following vaccinations was a higher than expected. Such information is not only of importance to trainers and horse owners, but is also of  relevance to equine researchers who now have an accurate temperature monitoring system available to them for future studies and research. The results from this trial were considered of such value that they were accepted as a poster presentation for the World Veterinary Association Congress, in Auckland, New Zealand in 2020. Learn more about the VetTrue System here.

"He's a monster": Addeybb proves he's best in the world The Sydney Morning Herald 17th April  2021Epona Biotec congratulates Newmarket Trainer William Haggis on the outstanding victory of Addeybb in the Group 1 Queen Elizabeth Stakes at Royal Randwick in Sydney. It’s a significant feat to transport a Thoroughbred racehorse halfway around the world, and have it compete, and win, at the very highest level. Everything must go exactly to plan to ensure the horse arrives in peak health and condition. For the UK to Australia flight, Addeybb travelled under the watchful eye of Dr. Des Leadon, a European Veterinary Specialist in Equine Internal Medicine. Dr. Leadon, well experienced in travelling with Thoroughbred racehorses, had an additional weapon in his arsenal for this journey.The VetTrue™ System from Epona Biotec was used to monitor Addeybb’s body temperature throughout the flight. The VetTrue™ System displaying a normal temperature chart for Addeybb during his long-haul flight from the UK to AustraliaA TailTab sensor placed under the tail, transmitted temperature data via BlueTooth to the VetTrue™ System App on Dr Leadon’s iPhone. Dr Leadon was able to safely and remotely monitor the horse’s temperature continuously for any fluctuations that might have indicated a developing illness such as shipping fever.During the flight the VetTrue™ System provided Dr Leadon with assurance that Addeybb was travelling well. No temperature fluctuations were seen, and the horse remained in good health throughout the flight.The subsequent victory in the Queen Elizabeth Stakes was a wonderful performance by Addeybb. The horse had won the race the previous year, so to return, and successfully defend his crown was quite an accomplishment.The VetTrue™ System has proven itself a vital tool for monitoring the health and wellbeing of horse during long-distance transportation. The technology is cost effective, intuitive to use, and allows for the simultaneous monitoring of multiple horses. For further information, please visit www.eponabiotec.com #Addeybb #QueenElizabethStakes #eponabiotec #VetTrue #TailTab #shippingfever #itsallaboutthehorse

For a limited time only, claim 50% off your first TailTab purchase when you trial the VetTrue System